Here's the latest pictures of the Spinone babies - two weeks old already!!  Most of them have got their eyes open now and are even started to do little barks, sooo cute :o) 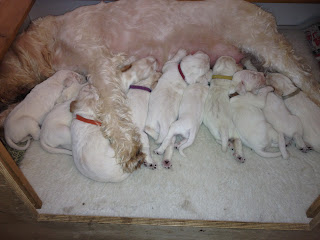 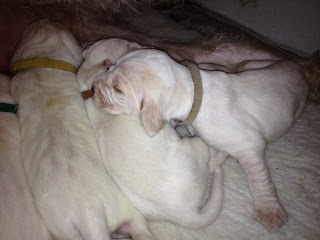 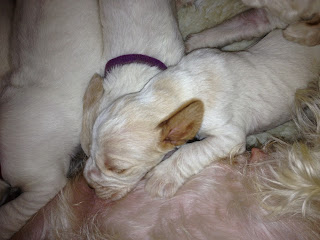 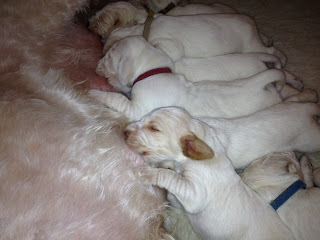 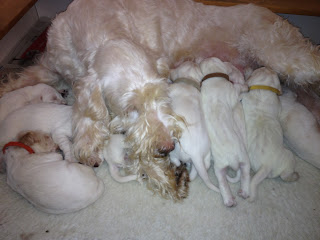 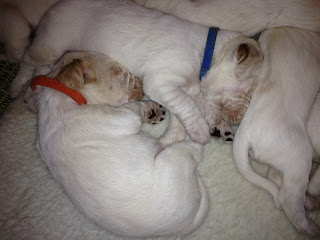 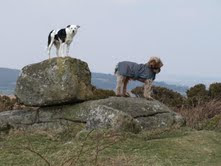 It was Tiber's (aka Dave)11th Birthday yesterday and according to Doug his owner apart from a few lumps and bumps he's still doing well and keeps active.  His life did not have an easy start as when he was around 3 weeks old he developed a horrible condition called ' puppy head gland disease' sometimes known as 'puppy strangles'  - he was from a litter of 9 and was the only one affected by this which is apparently very usual.  It started off with a couple of little pimples on his muzzle but ended up with his whole head and face swelling up and erupting with large pustules of ooze.  It was so upsetting to see this poor little pup going through such pain but throughout it all Tiber just didn't let it bother him one little bit.  He never missed a meal and still wanted to play with all the others even though when they knocked him it must have hurt him a lot.  We went to the vets about 3 times a week and the only thing that worked was steroids and antibiotics in large amounts - not ideal in a puppy but the alternative was even worse so we decided to try to give him the best chance.   Most of the hair on his face and head fell out and the chances of it growing again was pretty remote.  His face had to be bathed and oiled 3 times a day which he seemed to really enjoy so that was never a problem.
By the time he was 9 weeks old he was completely better and the only side effect was a totally bald muzzle, he did have some hair coming back on his head by that time but you can imagine how comical the poor little devil looked :o)
A friend of my vet had been hearing the story about 'Dave' throughout his treatment and he contacted me to say that he would love to have him.  Doug came to pick him up and from the first minute they seemed to love each other which needless to say gave me a huge lump in my throat.  He decided that he didn't want to call him Dave (don't know why not hehe) so renamed him Tiber, but to be honest he'll always be Dave to me :o)    Doug has kept me updated regularly over the years and always sends me pictures on his birthday which I love getting.

Tiber was totally fearless throughout his illness and followed this pattern when he went to Doug, which did get him in trouble at times but he seems to have survived intact all these years.
He still hasn't got any hair on his muzzle but now its all part of his charm. 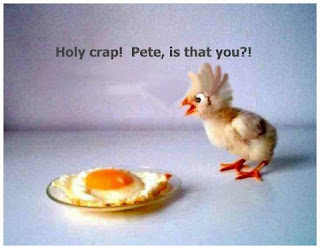 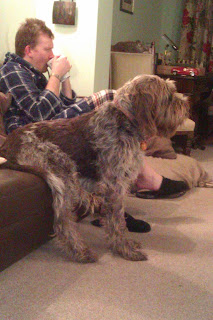 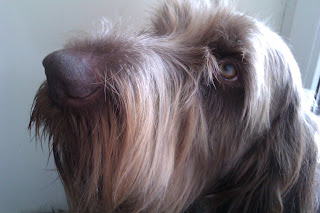 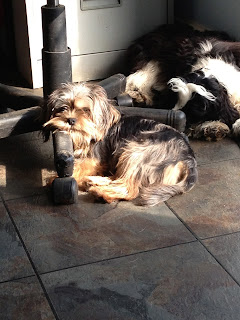 Little Beanz having a lay down in the sun - YES you did read it right, we actually had some sunshine this morning :o)   Sadly it wasn't with us for long and we're now back to it being dull and overcast, but it was nice while it lasted.

Dixie and Beanz were not in my good books this morning a they both came in from the back field absolutely covered in flippin' fox poo!!  The smell was stomach churning to say the least so they both had to have a bath and thankfully are now smelling a lot sweeter - until the next time :o)
Posted by Unknown at 06:20 No comments:


Heres a couple of pictures of last years babies - I'll put others on here as I get them.  All are doing really well in their homes and their new families are still thrilled to pieces with them.  All are by all accounts extremely obedient and a joy to live with (their words not mine) so obviously I am extremely happy by their progress.
Posted by Unknown at 06:12 No comments: 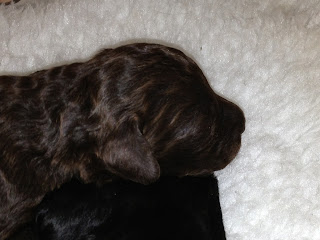 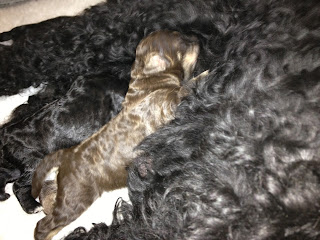 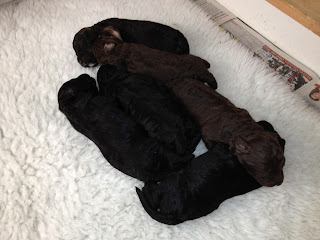 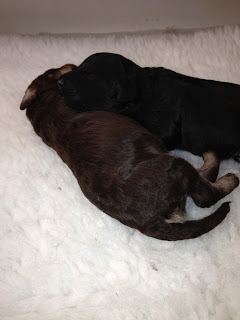 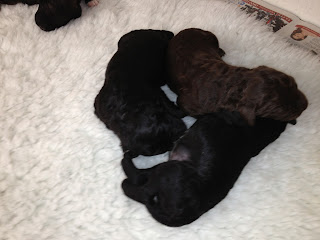 As you can tell by the pictures, the puppies are growing nicely and have more than doubled their birth weight.  Ebene is still being a fab Mum as before and will now leave them from time to time to have a fuss made of her and of course have her food.  This time next week their eyes will be opening and will be moving around the box a lot more.  I love this time as you can start seeing their little characters coming out :o)
Posted by Unknown at 06:05 No comments:

The Spinone babies are 10 days old now and you wouldn't believe how they've grown!!  Talk about little butter balls :o)  They are getting around the whelping box fast and its getting more tricky for Dori to get in there and actually lay down before they're on her.  She's got it down to pretty much a fine art now though and fools them that she's going go to one place then quickly gets up and lays downs on the opposite side, she not just a pretty face :o)
You can just see the corners of their eyes starting to part so in a couple of days they should be fully open and will be able to see the big wide world (well the big wide whelping box) and will start looking like proper little Spinone.

I must apologise to the people who have been waiting for new pictures of their babies but somehow I managed to lock myself out of the blog and it took me several days to work out how to get back into it to post something.  Not being the best at technology I was actually quite chuffed with myself for figuring it out eventually hehe! 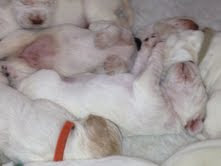 For some reason most of my litters seem to be born in March which usually works out nicely for the new puppy owners as by around May we should be getting better weather so making it easier to get out and about with the pup and housetraining.

It was my lovely Madges' 10th Birthday last week so lots of birthday greetings to be had there.  Madge (Sh Ch Netis Dixie Chick JW) was my first home bred Show Champion and Junior Warrant holder - not in the front of the queue when the brains were given out but her sweet nature and beautiful looks more than made up for that.

She only had one litter and from that I kept Cenzo (Sh Ch Netis un Nuovo Inizio JW ShCM) who went on to become a Show Champion, Junior Warrant holder and gained his Show Certificate of Merit a first in the breed to hold all three titles. I think one of my proudest moments was when he won the Challenge Certificate at Crufts under breed specialist Janet Neil, never in a million years did I think that would happen.  Madge passed on her wonderful demeanour to him and he's a real big old softy.
Its his 6th Birthday today so many happy returns to him and his brothers and sisters, Evie, Lily, Watson, Spirou and Yogi.   I'm also proud to say that Watson is used as a guide dog for his owner Maelea and is apparently a natural - obviously got his brains from his Dad :o)   Yogi is a PAT dog and loves being fussed by everyone.

Cenzo then went on to sire a litter with Lacey (Netis Brezza) and his daughter, Cima also became a Show Champion, Junior Warrant holder and gained her Show Certificate of Merit.  At the time they were the only Spinone to have all three titles to their name and I think this is still the case.  A girl from the litter went to the USA to Pat Fendley (Mals About) who I met a couple of times at Crufts and she is now an American Grand Champion there.

Fingers crossed if theres a nice little girl in the litter I have by him now and I keep her she might carry on the family tradition :o)

Ebene's pups arrived on Thursday spot on time.  We've got 2 Boys and 4 Girls all good weights and doing really well so far.  Ebene had an easy delivery and is loving being a Mum again.  Theres a picture of them on my website and I will be putting on pictures as they grow on here too.

All the others are very interested in the new arrivals and keep trying to peek through the gate at them which is quite strange really as they're not at all bothered about looking at the Spinone babies :o) 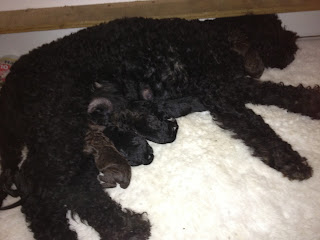 It was the 1st Birthday on Friday of Ebene's last litter so belated (on here) Happy Birthday to Claude, Jeffry, Henry, Cassie and Leika.  I've got a couple of pictures which I will put on asap.

I forgot to say that while all this has been going on little Beanz came into season.  Didn't bother her one little bit and thought it was great fun flirting with Cenzo, poor boy :o)

Dori had a restless night on Thursday and had first baby at 8.25am Friday - it was a little boy weighting in at a whopping 652 grammes!!  Another 5 pups arrived in quick succession, all good weights and fitting fit.  So that was 3 girls and 3 boys so far.  Dori then decided she needed a nap which ended up lasting around 4 hours.   She starting getting into gear again around 5pm and number 7 arrived at 6pm. Again they all arrived very quickly and the grand total is 11 pups, 6 girls and 5 boys :o)  They are all doing well so far and mum is very relaxed and enjoying her babies.

Heres a few pictures of them all from start to finish.

For the last several weeks I've been busy meeting potential new puppy owners and introducing them to the good and the bad, the fore and the against of bringing Spinone and Barbet into your home.  I'm a great believer in letting people know the total truth about characters/grooming etc as its no good lulling people into a false sense of security about silly things for example  'how much mess' they can make.  People certainly have seen the dogs at their worst recently because of the torrential rain and resulting mud we've had.  If this doesn't put people off then nothing will :o)

The visitors have now stopped until around 4 weeks after the arrival of the pups and then it will be non stop again as everyone comes round to meet the babies.

In between meeting everyone I've also managed to get all the dogs groomed, clipped/ hand-stripped and bathed.  The only thing thats been a bit neglected is the housework (shame) even though we've also fitted out our en-suite en-suite with new units/loo/sink.  I always remember a sign I saw at an old friends house saying 'A clean house is the sign of a wasted life' haha :o)  Love it, thats my excuse and I'm sticking to it!!